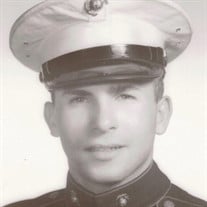 Victor J. Vasta, 86, of Dewitt, passed away April 3, 2022, at Iroquois Nursing Home. He was born in NYC to the late Salvatore & Mary (Basino) Vasta and moved to Syracuse at 11 years old. Settling in Eastwood, Victor attended Eastwood High School (EHS) where he met his high school sweetheart and future wife, Geraldine Salvatore. He participated in playing baseball and football while at EHS and upon graduation his main goal was to attend college. After working at General Electric for 8 months, Victor joined the United States Marine Corps (USMC) with the Salt City Platoon and many of his high school friends. They knew their draft numbers were coming up and chose to serve in the USMC. Upon returning from boot camp, he was awarded the Key to Syracuse for the Salt City Platoon, graduating the first in his class. After serving his allotted time, Victor returned to attend and graduate from Le Moyne College; he was hired by the Internal Revenue Service (IRS) before even graduating from Le Moyne College. Victor had a short career with the IRS, choosing to start his own accounting practice, he was an enrolled agent for over 40 years. He was also an instructor at Central City Business Institute and was adored by his students. Victor did a lot for the community of DeWitt, he was a charter member of DeWitt Sunrise Rotary, receiving the Paul Harris award in addition, he was a member of the Republican Committee and the Receiver of Taxes for the Town of DeWitt for 23 consecutive years. He was incredibly proud to do that job for the people of DeWitt and they enjoyed going to speak with him while paying their taxes. Can you imagine that? Victor is survived by his loving wife of 69 years, Geraldine (Salvatore) Vasta; his son, Victor Jr.; his daughters, Cynthia (Stephen Sadlocha) Vasta, Elizabeth (Earl Dumont) Vasta, and Stephanie Vasta; his grandchildren, Nicholas Sadlocha, and Brandon Strouse; his sister Gaetana (Vasta) Sillaro; along with several nieces, nephews, and cousins. Funeral Services will be private.

The family of Victor J. Vasta created this Life Tributes page to make it easy to share your memories.

Send flowers to the Vasta family.