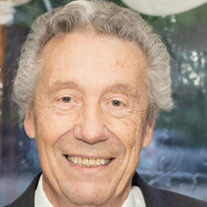 Victor Villani, 87, of Jamesville, NY, passed away peacefully on Thursday December 17, 2020 at Iroquois Nursing Home. He was born in Campobasso, Italy, son of the late John and Paolina (DiCristofaro) Villani. Victor immigrated to the United States at the age of 16 in 1949. He was a 1951 graduate of North High School, where he met the love of his life, Sarah Morina. They were married in 1955. Victor was a veteran of the United States Army, serving in France during the Korean War. He first worked at Carrier Corporation, but then found his true calling as a barber. He perfected his professional barbering skills for over 60 years at Eastwood Barber Shop and then at Vic’s Men’s Hair Styling, and he returned to Eastwood Barber Shop until his retirement in 2019. Countless customers in Syracuse and beyond from all walks of life (political and business leaders, television personalities, blue-collar workers, white-collar workers, and family members) sat in Vic’s chair while he worked his magic with his scissors, clippers, straight razors, and combs. His customers became lifelong friends, often including multiple generations in the same family. He would regale his customers with tales of his childhood in Italy and his family, and he would also candidly share his opinions on many topics including politics, sports, and food. Victor received awards in several national barber shows early in his career. He also sold and fitted hairpieces for Medi-Hair (later known as Head-o-Hair) and New Man. Victor worked hard to support and raise his family, but he also knew the importance of enjoying life to the fullest and sharing that enjoyment with his family and friends. His early athletic pastimes included soccer and bowling, and he was an avid golfer for almost all his adult life. He and his family went on vacation to the Thousand Islands every year for 30 years. He enjoyed fishing, hunting, gardening, winemaking, woodworking, and cooking, and he joyfully shared the results of these endeavors with others. He had an engineer’s mind, and it was apparent in his various home projects. He was an enthusiastic sports fan, especially of professional golf and Syracuse University basketball and football. Victor was very generous in referring family members and friends for job openings and interviews that were offered by his customers. Victor was a devoted husband, father, grandfather, and great-grandfather who was always willing to help his family when needed. He frequently stressed that family was the most important thing in life, and his favorite occasions were when his family was together around the table, enjoying great meals, lively conversation, and his homemade wine of course! Victor was a communicant first at Our Lady of Pompei Church and later at Holy Cross Church. He will be greatly missed by all who knew and loved him. Victor was predeceased by his beloved wife, Sarah, in 2018. He is survived by his five children, Paula (Mark) Leeds, Marisa (Paul) Marron, Antoinette Villani (Frederick McCandless), John Villani, and Joseph (Fallon) Villani; eight grandchildren, Theresa Safe, Paul Anthony Martini, Renee (Nicholas) Nigro, Tara Leeds, Sarah Marron, Max Leeds, Jonas Villani, and Mary Villani; three great-grandchildren Gianna, Roman and Louis Nigro; his loving sister, Louisa Marzocchi; his sister-in-law Mary Morina; and several nieces, nephews, and cousins. Due to the current Covid-19 pandemic, a private funeral service will be held for immediate family. For those wishing to attend remotely, please use the link on Victor's tribute page at 1:00 pm on Monday, December 21, 2020. Victor will be laid to rest next to his wife, Sarah, in St. Mary's Cemetery Mausoleum, Dewitt, NY. The Villani family plans to hold a memorial Mass and a celebration gathering of Victor's life in the summer of 2021. Victor’s family would like to extend thanks to Peregrine Senior Living and Iroquois Nursing Home for the compassionate care that he received while residing at both places during the past year. In lieu of flowers, contributions may be made in Victor’s memory to St. Jude Children’s Research Hospital 501 St. Jude Place Memphis, TN 38105 (www.stjude.org) or the National Wildlife Federation PO Box 1583 Merrifield, VA 22116 (www.nwf.org).

Victor Villani, 87, of Jamesville, NY, passed away peacefully on Thursday December 17, 2020 at Iroquois Nursing Home. He was born in Campobasso, Italy, son of the late John and Paolina (DiCristofaro) Villani. Victor immigrated to the United... View Obituary & Service Information

Send flowers to the Villani family.