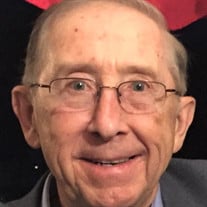 Dr. William E. Forth of Baldwinsville, New York and Vail, Colorado, passed away on July 4, 2019 at the age of 86, surrounded by his wife and children. He was born to Emery and Susie Forth in Syracuse, New York on August 12, 1932. He was predeceased by his sister, Pauline Burr. Bill was a graduate of Onondaga Valley Academy. He was a proud alumnus of his beloved Hope College in Holland, Michigan, where he and his wife established scholarships and contributed to multiple capital improvements on campus. Bill was a graduate of Case Western Reserve University, School of Dental Medicine, where he served as a member of the dental school’s alumni board. After graduating from dental school, Bill was a Captain in the United States Air Force and served as a dentist at Eielson Air Force Base in Fairbanks, Alaska for two years. Upon discharge from the Air Force, Bill returned to Syracuse and established a general dentistry practice next to Sweetheart Corner in North Syracuse. For over 50 years, he skillfully and enthusiastically practiced dentistry and cared for generations of families in the course of his practice and considered many of his patients, friends. Throughout his life, Bill held several professional leadership roles, including past president of the Onondaga County Dental Society and past president of the North Syracuse Chamber of Commerce. As president of the North Syracuse Chamber of Commerce, he spearheaded a number of initiatives, including academic scholarships for local high school students. He was a longtime member of Pitcher Hill Community Church in North Syracuse. Married to Marilyn (Torgersen) Forth, the couple celebrated their 62nd wedding anniversary, only days before his passing. Marilyn was his constant companion, dancing partner, travel buddy, and best friend. Bill and Marilyn shared an amazing lifetime of adventure and were blessed with good health for many years. Bill was an avid runner, competing in 28 marathons, including the Boston Marathon and several Marine Corps Marathons. He completed his last marathon at the age of 78. Bill was most happy, however, on the ski slopes and relished laying the first tracks on a sunny, fresh powder day in the back bowls of Vail. He made his last trips to Vail this past winter. Bill is survived by his wife Marilyn, as well as daughters Lynn Forth and Dr. Teri Forth-Tromblee (Dr. Brian Tromblee), and his son, Gordon Forth (Debbie Forth). He was the grandfather of six grandchildren, Paige and Ella Tromblee, as well as Abigail, Emily, Kathryn and Timothy Forth. He took great pride in each of his children and grandchildren. He is also survived by a niece, Judy Ellis and nephews, Keith McFall, Jeff Burr and their families, as well cousins and many dear friends in Syracuse and Vail. The family wishes to thank those who cared for him at the Wilmot Cancer Center at Strong Memorial Hospital in Rochester, NY and St. Joseph’s Hospital in Syracuse, NY. Calling hours are Friday, July 12, 2019 from 4:00 to 7:00 pm at Thomas J. Pirro Jr. Funeral Home, 3401 Vickery Road, North Syracuse, NY. A celebration of Bill’s life will be held at Pitcher Hill Community Church on Saturday, July 13, 2019 at 10:00am, 605 Bailey Road, Syracuse NY. Donations in his honor may be made to Ronald McDonald House Charites of Central New York or a charity of choice.

Dr. William E. Forth of Baldwinsville, New York and Vail, Colorado, passed away on July 4, 2019 at the age of 86, surrounded by his wife and children. He was born to Emery and Susie Forth in Syracuse, New York on August 12, 1932. He was predeceased... View Obituary & Service Information

The family of Dr. William E. Forth created this Life Tributes page to make it easy to share your memories.

Send flowers to the Forth family.