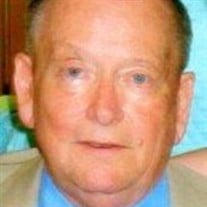 William F. “Bill” West, Jr., 75, of Brewerton, passed away peacefully on Wednesday, April 27, 2022, at St. Joseph’s Hospital surrounded by his loving family. Born in Syracuse, son of the late Rose Anita (Martin) and William F. West Sr., he was a graduate of North Syracuse High School class of 1964 and Alfred State College. Bill was a proud U.S. Army veteran who was awarded the Bronze Star and the Purple Heart for his service in Vietnam. After an honorable discharge in 1973, he served for many years in the Army Reserve as Commander of the 1209th Signal Detachment at Fort Drum. He also served as a sales representative for Diefendorf Gear and later became owner and president. He was a proud member of the Knights of Columbus Bishop Cunningham Council 10904. An active member of the Color Corps, he previously served as Faithful Navigator. In his free time, Bill enjoyed hunting, fishing, and spending time with family and friends who will miss his storytelling and unique sense of humor. Along with his parents, Bill was predeceased by his son, Patrick. Bill is survived by his loving wife of 36 years, Mary Lynn (Iannettone) West; his daughter, Christina West (Alaina Baez); a sister, Peg (David) Mawhinney; 2 brothers, Allan (Cathy), and James West; along with several nieces, nephews, and cousins. A funeral service in celebration of Bill’s life will be held on Tuesday, May 3, 2022, at 9:00 AM in the THOMAS J. PIRRO JR. FUNERAL HOME followed by a Mass of Christian Burial at 10:00 AM in Sacred Heart Church of Cicero, 8229 Brewerton Rd., Cicero. He will be laid to rest in North Syracuse Cemetery. Family and friends may call on Monday, May 2, 2022, from 4:00 – 7:00 PM at the funeral home, 3401 Vickery Rd. (corner of Buckley Rd.) N. Syracuse, NY 13212. In lieu of flowers contributions may be made to Francis House, 108 Michael’s Ave., Syracuse, NY 13208.

The family of William F. "Bill" West, Jr. created this Life Tributes page to make it easy to share your memories.